Benchmark : Clear Linux vs The Rest 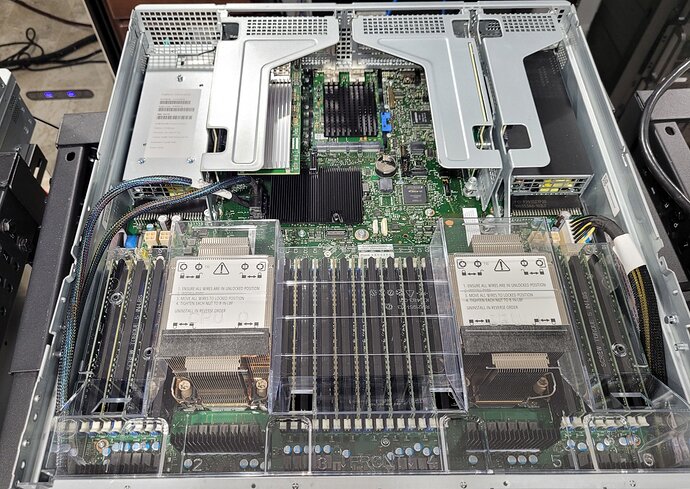 Given the recent releases of Ubuntu 22.04 LTS and Fedora 36 among other recent OS updates, it's time for a fresh look at how various Linux distributions are performing. 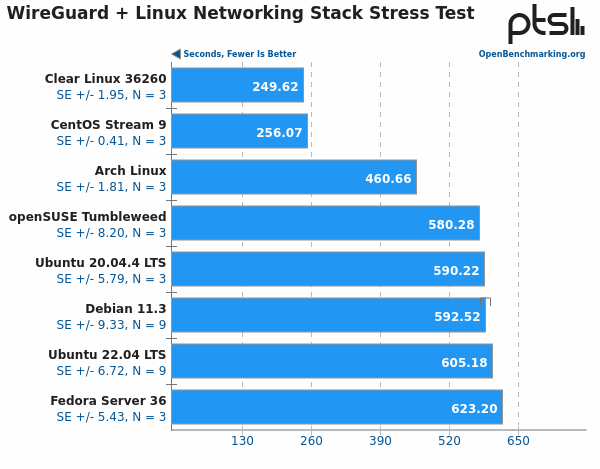 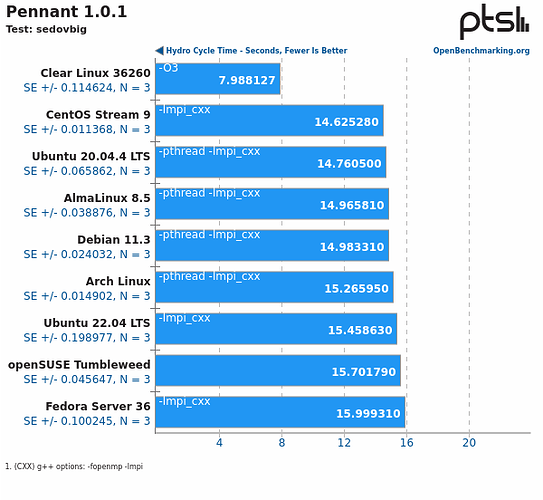 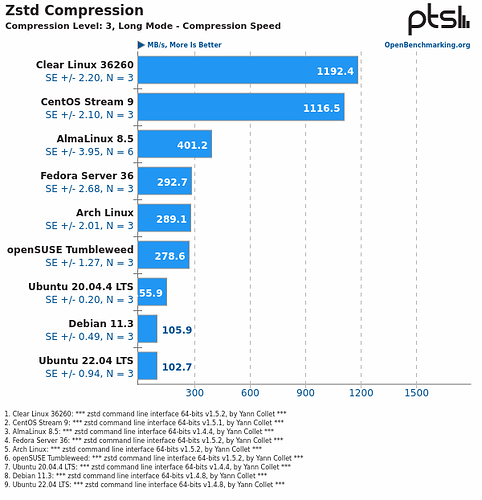 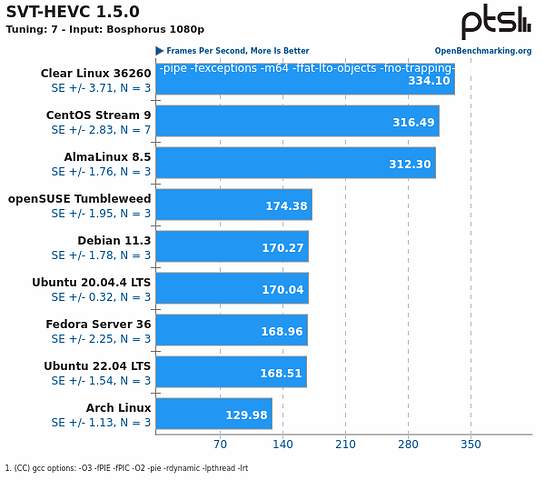 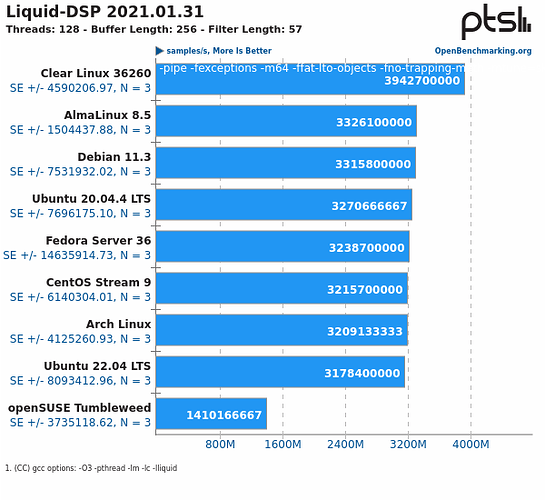 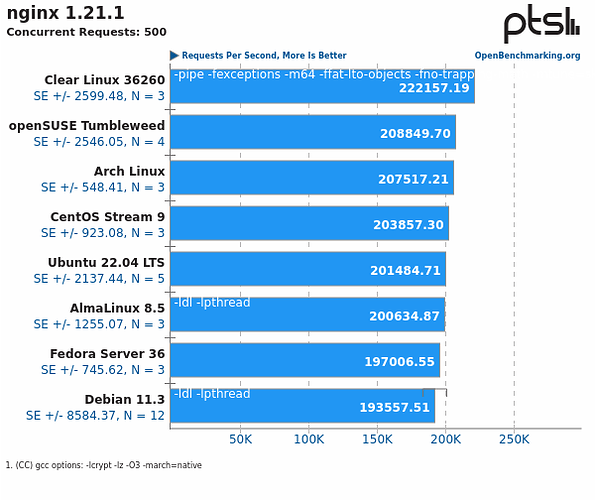 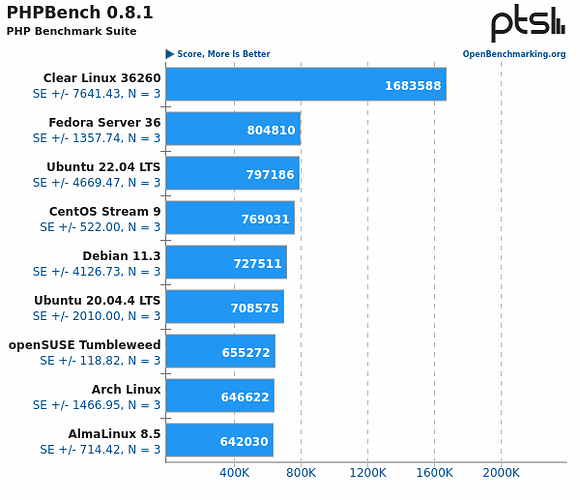 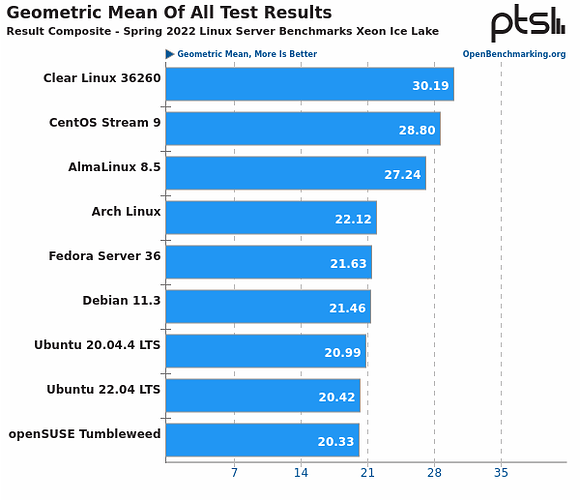 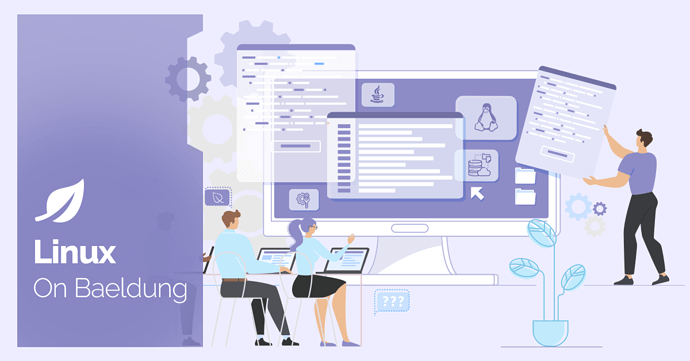 Learn about benchmarking the main hardware components of a system under Linux.

I won’t use it because it seems that it has very low hardware support and even less software support than Linux itself, but I always wondered if FreeBSD has better performance than Linux/Clear Linux.

I think that FreeBSD has lower latency and it’s better suited for network tasks, but what about application performance? I have read that Phoronix benchmarks about FreeBSD are innacurate.

I am stuck with a non booting system with no way to recover. Currently use Arch as my daily and server but was impressed by the speed and snappiness. I thing I will give CentOS a try as it’s close in speed and better support!

I always wondered if FreeBSD has better performance than Linux/Clear Linux. 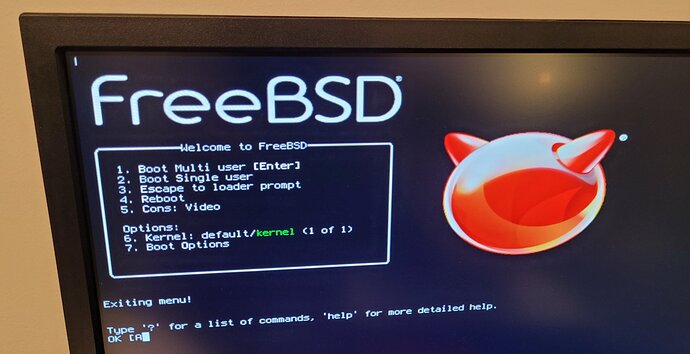 In OpenJDK Java benchmarks, the Linux distributions generally led but DragonFlyBSD 6.0.1 did mange to compete surprisingly well and mostly on-par with the Linux distros running on this Intel Core i9 10980XE workstation. When measuring...

Once upon a time :

Hm… yeah, I did see the phoronix benchmarks, but I have read this:
https://forums.freebsd.org/threads/benchmarks-freebsd-13-vs-netbsd-9-2-vs-openbsd-7-vs-dragonflybsd-6-vs-linux-phoronix.83311/

Although I gave it a second read and they seem to complain about the zstd compression test, while not really saying anything about the other tests. I just thought that maybe Phoronix wasn’t that accurate with BSD since he does most of his stuff on Linux. But… idk, maybe the compression test is the one that is not accurate and the rest it is.

Although the second link you sent is interesting, it shows that at least in 2008 FreeBSD was ahead of Linux, not sure if this is the same as of now, or if I should fully trust the Phoronix Benchmarks.

I am stuck with a non booting system with no way to recover. Currently use Arch as my daily and server but was impressed by the speed and snappiness. I thing I will give CentOS a try as it’s close in speed and better support!

Also, sorry to read that, it’s strange that you can’t boot your system, I’m still using an old Intel netbook computer (Intel Classmate Marblepoint, EF10MIX from 2014) and it works wonders here… (actually, I’m writing this using CL on that netbook), using CL here as a daily driver without issues.

I think I have read a thread where you posted about it, but honestly I’m not sure what could be happening, I would say it’s a hardware configuration which may be causing trouble, some configuration in the BIOS/UEFI that doesn’t play well with CL… who knows… I did read something that you have set a RAID, on my hand my configuration is pretty much simple, it’s just an old 320GB HDD and 4GB of DDR3 RAM at stock speeds. Guess the simple the hardware configuration the better?
But yes, if you can’t make it work, you should look for a distro that better suits you, CL community isn’t as big as, say, Ubuntu, so it may be more difficult to diagnose some problems.

should I fully trust the Phoronix Benchmarks

You can run it yourself and compare :

The Phoronix Test Suite is the most comprehensive testing and benchmarking platform available for the *nix operating system. This software is designed to effectively carry out both qualitative and quantitative benchmarks in a clean, reproducible, and...

Have been using Arch as my daily for work and home for over 15 years, run a local server that hosts my business and developed a gui interface to the sql database. I have not had a system I could not rescue in a decade and took it as a challenge. There was no where to access any info or log as to why it would not boot and no tools that would work to restore. 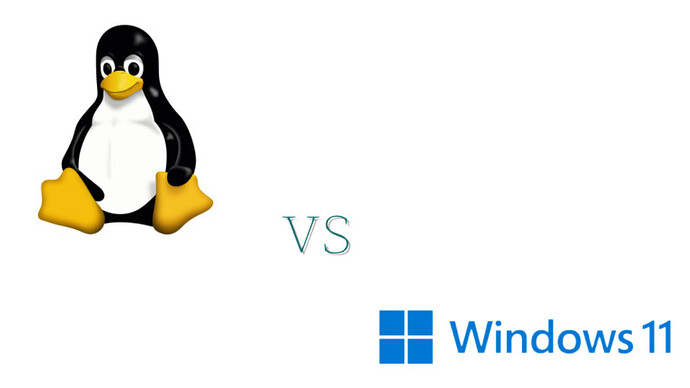 Intel's Clear Linux has lent a hand to AMD's Ryzen 9 7950X, and together, they have managed to extend the performance lead that Linux already had on Microsoft's Windows 11 22H2 update.

This makes me wonder why MS doesn’t bother in improving Windows’s terrible performance. Instead of having the OS full of bloatware by default and running a lot of services, it would be awesome if they start having a more “quality rather quantity” approach with the OS.
Although I do understand that they don’t bother because Windows is be mainstream, they have success, and most people doesn’t care about the performance. 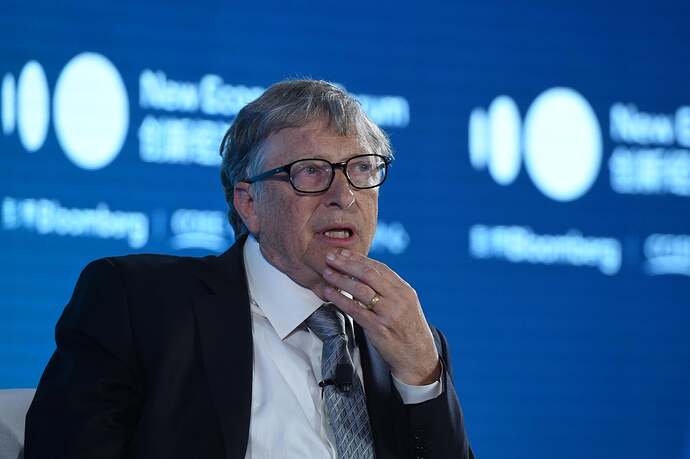 Bill Gates thinks you should hire lazy people and for good reason. In honor of National Lazy Day, see why, here. Following my Core i5 13600K and Core i9 13900K Linux reviews for these new Raptor Lake processors, which were carried out under Ubuntu Linux, I've been carrying out my usual follow-up tests like looking at how well these new Intel CPUs are running...