I installed the latest LTS kernel (2021) and it won’t boot. I get a min/max iwlwifi error that it needs to be between -39 and -66. /usr/lib/firmware/iwlwifi-so-a0-hr-b0-64.ucode.zst is installed. (see attached screenshot). No problems booting with the regular native kernels (currently 6.1.1-1228.native). 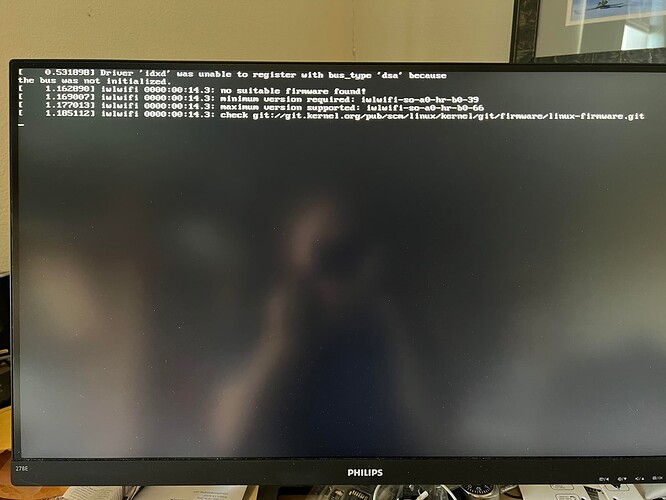 I have a new computer with new hardware and I’m thinking that it needs a newer driver than this kernel supports.

You are better off reporting this in GitHub.
Another person and I were having issues regarding Wi-FI and Bluetooth with our Realtek adapters, and they fixed it up.
It’s true that LTS kernel isn’t working with Wi-Fi/Bluetooth though. Either use native kernel or report it in GitHub.

Looking at the system journal, it gets past these errors, but fails at the video driver. It seems like the system has locked up, but crtl-alt-delete can reboot. Nothing shown on any of the virtual consoles either. I tried lts2020. It booted to low rez video. I uninstalled both lts kernels. Might try the DKMS kernel.

Also, uninstalling does not remove the kernel or config file from the EFI partition and they still appear on the boot menu. I had to remove them manually. This was reported in another thread I read.